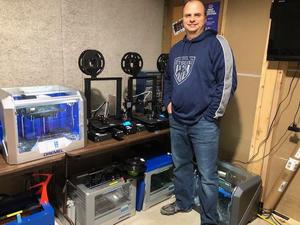 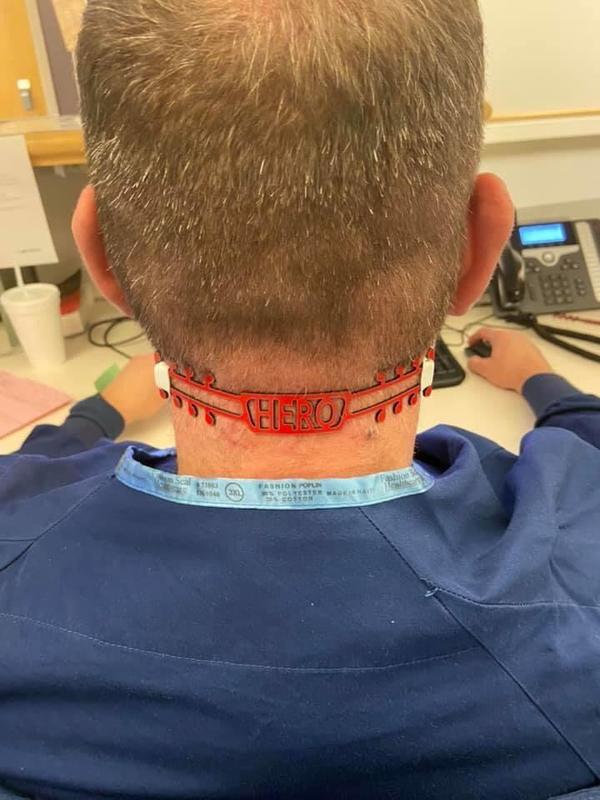 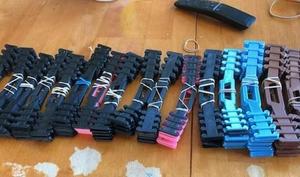 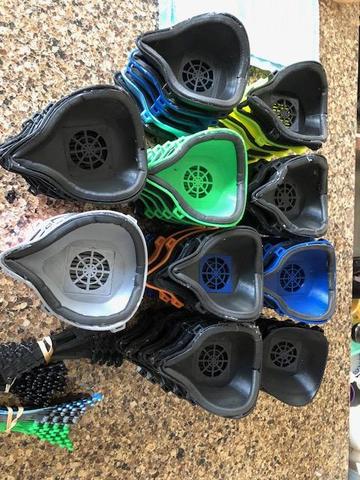 When in-person instruction at schools came to a halt, 3D printing seemed like a natural project for technology teacher Michael Miller to turn to, “I feel like I wanted to do something and this is something I can do.”

Michael Miller brought 3D printing technology to Otsego classrooms more than five years ago and it has exploded. Courses increased across the district. Designing and computer science is a passion for Miller and he loves to dig into new projects to see what he can create. It only made sense to turn to 3D printing in this unprecedented time. “You want to help people who are helping people,” he says. There was a need and he could help fill it. He has four 3D printers at home, so when a friend in the healthcare industry asked about printing 3D masks, he started working. He’s donated about 50 masks to the Alamo Nursing home and more to other friends and family. Without school, he brought three other 3D printers to his home to get them done quicker.


The next project, ear guards, came from a friend, and Otsego parent, Barry Lafler.  “If you’ve ever worn a mask, especially one taunt to the face, at the end of a 10-13 hour shift, you’re pulling it off so your ears aren’t burning,” he explains. Lafler is a nurse at Bronson Hospital. He saw that Miller was printing masks and sent him an article he saw about 3D-printed ear guards. The next day, Miller brought over 160 of them. “I took them into work and people were just so happy,” Lafler said, “I went around the floor and everyone I came across wanted one.” The guards have several notches, so they’re one size fits all. The mask straps hook onto either side and the guard rests on the neck. “It’s amazing. It’s so convenient and it’s so much less painful,” Lafler says. They can be shared because the plastic can be easily disinfected from shift to shift.


After the first round, Miller added his laser cutter to the project, etching out the word “HERO” in the back of the ear guards. “These people are out there risking their life every day. Those are the heroes. You just want to help somebody,” Miller says.


“One of the biggest things, as healthcare workers, that we’ve noticed and appreciated are people who are in a situation where they feel like they can’t directly affect things, find a way and that’s what Mike did,” Lafler says. “This seems like something small but it really isn't when it impacts your entire day.”


Miller made about 300 ear guards, 70 masks and is working on a specific mask project now. “They’re starting to catch up with the PPE, where before they weren’t sure what they were going to get so we were working on those,” Miller explains. But he says if there’s a need again, he’ll do what he can.


As a FIRST Robotics coach, both at the middle and high school level, his work is also contributing to the FIRST Robotics goal of making 1 million different pieces of PPE in Michigan.

On a personal level, he’s gladly taking on the engineering challenge businesses and designers are faced with, “On the engineering side, we’re having to think of things we haven’t had to think about before.” That also has him thinking about what his computer science and engineering classes at Otsego High School will look like in the future. They’ll get the same challenge - to develop apps, touch-less products and essential supplies. They’ll need to look at forecast modeling to see what the need will be and contribute in a real-world situation.