Dancing in the Big Apple 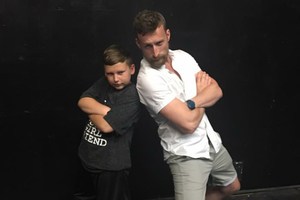 OMS 7th grader Robert Phillips hit the Big Apple this summer to dance, act and sing with some of Broadway’s hottest stars.

Last spring, Robert Phillips won a scholarship to attend the Joffrey Dance School for Musical Theatre in New York City. He was there for five days in July working with choreographers and dancers from several Broadway show including Phantom of the Opera, Billy Elliott, Wicked, Fosse, Newsies, How the Grinch Stole Christmas and An American in Paris. While he was there, he not only took classes from prominent actors and actresses, but also got to see three musicals including Phantom of the Opera, Wicked and Aladdin. The week culminated with a performance of two songs from Wicked at Marymount Manhattan College. Phillips has been dancing at Patti Herm School of Dance since he was four; this was a trip of a lifetime!