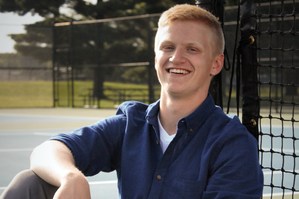 Congratulations to senior Isaac Clemens for being named the 2018 DAR Good Citizen.

He’s been the lead actor in the last two musicals but Isaac Clemens is also a leader at Otsego High School and was chosen by the staff as the 2018 DAR Good Citizen award recipient.

“I am so incredibly humbled to receive this award,” says Clemens. “This award is very special, and it’s an honor to have even been considered for it.”

DAR (Daughters of the American Revolution) Good Citizen award winners are chosen for their leadership, dependability, service and patriotism, all of which are important character traits for Clemens. “In a lot of ways, I see them as key components that make me who I am,” he says, “I strive very hard to be a dependable person, someone who you can call when you need them and they will be there.”

Clemens is the Student Council president, treasurer for his senior class and National Honor Society, is a worship leader in his church youth group and on the student leadership team at VOX at Valley Family Church. Clemens tries to lead by example in a positive path, but feels everyone is a leader, just in their own way, “Looking at the world as though everyone is a leader really just empowers my views of others and what each person is capable of.”.

Clemens is very involved in community service in all of these positions, as well, which is another important piece of who he is, “I see service as such an important thing, being more than just work that is ‘good’, but rather as an opportunity to put others before yourself and use your own gifts and capabilities to better the lives of another person, which in a lot of ways is what life is really all about.”

He has participated in five of the OHS musicals: Guys and Dolls, Beauty and the Beast (Lumiere), Peter Pan (Smee), Fiddler on the Roof (Tevye) and Annie (Oliver Warbucks). He also participates in tennis and is captain. Clemens plans to attend Central Michigan University in the fall to major in Music Composition/Vocal Performance with a minor in Leadership.