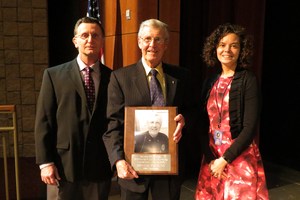 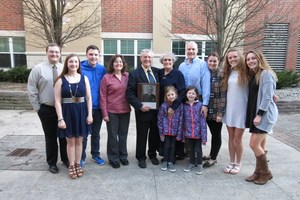 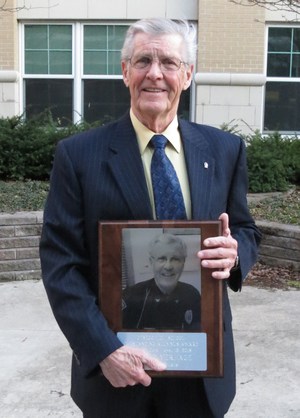 The 2018 Outstanding Alumnus Award was presented to Donald VerHage. The 1961 graduate was presented the award in front of hundreds of students at the annual Academic Honors Night.

“I was humbled by the fact that I would even be considered for, what I think is quite an honor. There are many others that are probably more deserving than me, but I am proud of the fact that I was considered as the outstanding alumnus,” VerHage says.

After graduation from high school, VerHage drove a garbage truck for City Disposal Service and worked on his family farm. He entered into a career in law enforcement for the Kalamazoo Police Department in 1965 where he worked in various positions and was later cross-trained as a firefighter when the department moved to a public safety department. He was promoted to Sergeant in 1984 and Lieutenant in 1986. He also received advanced training certificates in police/fire operations from Northwestern University, Michigan State University, New York City Coroners Office and other programs.

Otsego gave him the courage to “go for it” when opportunities arose, “It helped me develop character for life,” he says in giving him direction and supportive teachers.

Proving it’s never too late to get a college education, VerHage received his Associate’s Degree from Kalamazoo Valley Community College in 1989 and his Bachelor’s Degree in Criminal Justice from Western Michigan University in 1993 at the age of 50. He says it was a desire to fulfill what he hadn’t been able to do before and prepare for potential opportunities after his retirement.

VerHage retired in 2015 after 50 years in law enforcement; he served 31 years at the Kalamazoo Department of Public Safety and 19 years as the Chief of Police at the Mattawan Police Department. He is also the 7th longest serving police officer in Michigan.


VerHage is a regular in the stands at various Otsego athletic and band events supporting his grandchildren. He has been married to his wife Carol, a 1963 Otsego graduate, for 54 years this May. Their three children are Otsego graduates; they have nine grandchildren, seven who have or are going through Otsego schools.